When it comes to logo design, we don’t all have to be graphic designers to look at something and see if it just works. Or not. This past weekend, Marvel released a ton of bright and flashy new logos for their Phase 4 cinematic lineup.

Of course, we see some familiar titles such as Thor and Doctor Strange, along with some new adventures with Shang-Chi and the Legend of the Ten Rings. The important thing to know is each of the logos immediately encapsulates the vibe for the movie and sets our imagination running. They excite us and capture our interest.

With Doctor Strange, we get an eerie, mystical, and magical vibe. The new Thor logo gives a very distinct “old comic” feeling that builds off of the previous Thor: Ragnarok film (which is the best Marvel movie. No, I don’t and won’t ever take criticism on this). As Shang-Chi is new to many of us who don’t keep up with the comics, we initially get a sense of epic Kung-Fu battles awaiting for us in the East. All of these logos perfectly encapsulate the characters and themes of the movies they’re going to be representing in one harmonious and straightforward image.

But then you see it. 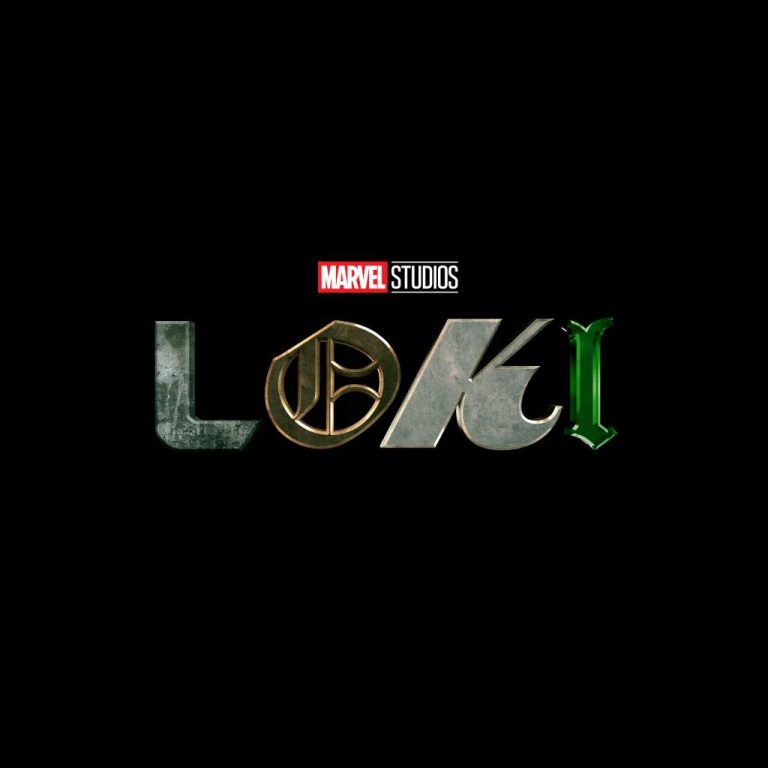 And you have to stop and wonder. Wow, Disney, for a company with a bajillion dollars and hundreds of focus groups probably having laid eyes on this monstrosity, you really, absolutely dropped the ball on this one, huh? Honestly. What am I looking at here?

Now, to understand why they may have gone with this kind of logo, we need to step back and think of a few words that initially describe Loki himself. Mischievous, dark, and most importantly, chaotic. There’s even simple imagery we think of when we hear his name: the color green, his iconic helmet, ice, and more. Any of these elements could have been incorporated fluidly into the logo to give the definitive “Loki experience”. However, instead, we are given this amalgamation of horror that hurts my eyes.

If any of the other logos titles were changed to something completely random, we’d still be able to get a cohesive theme and emotion of what they are trying to convey. Thor’s new logo would still have that old comic-book vibe, and Shang-Li would still feel Eastern. Now, with Loki? I’m not sure the same could possibly be said. Quite frankly, if it wasn’t called Loki, I’m not sure anyone would even know what the movie would be about upon first glance (which is kind of the point of a logo). Needless to say, I am still excited for the series, no doubt. But when it comes to spreading the message and exciting viewers who may be skeptical, this probably isn’t the way to go.

Now, this isn’t to say there’s one definitive way to create a great logo. Complex doesn’t necessarily mean bad, and simple doesn’t necessarily mean boring. However, the goal should always be to be clear, conscience, and convey the tone of your brand. It’s about expressing your personality and capturing the attention of the audience with one quick glance. Even if your logo doesn’t explicitly say what your company is about, it should be memorable and clear to viewers. When your logo is jumbled, cluttered, hard-to-read, and sloppy, it conveys these exact thoughts and feelings towards the audience.

So, the Loki logo might be a failure, but at least it ended up generating a good amount of discussion on social media. Looks like there’s no shortage of Marvel fans creating their own logos for the film, either. Thanks, Twitter! These are beautiful. 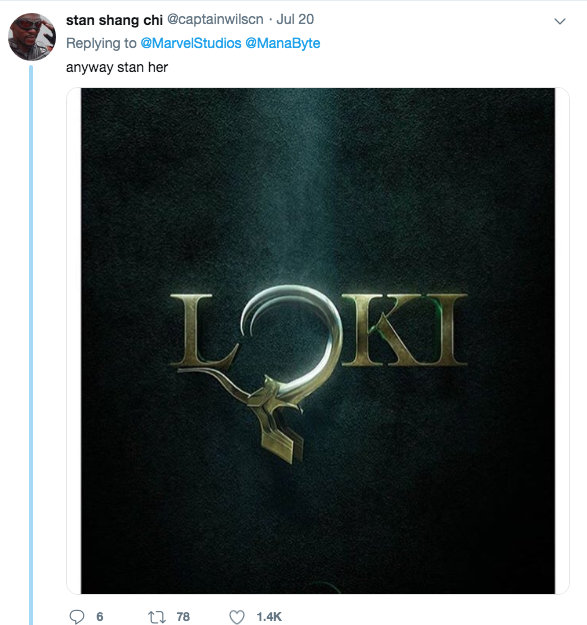 This logo was originally created by @bosslogic. Many fans prefer it over the official logo and have been sharing it around social media. It’s been mistaken for official content multiple times, most likely due to the professionalism and clarity of the design. 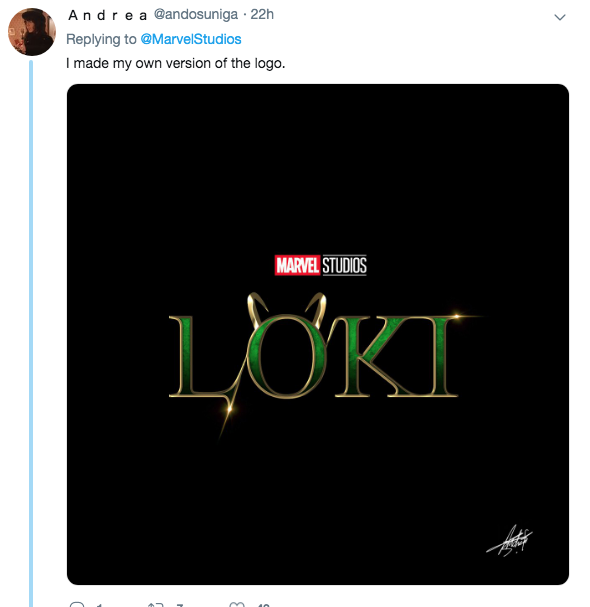 Another fan-made logo in attempts to realize the character more immediately by combining a more recognizable font, the color green, and Loki’s iconic helmet.

Oh, and we can’t forget the wonderful logo designs by those poking fun at the original. 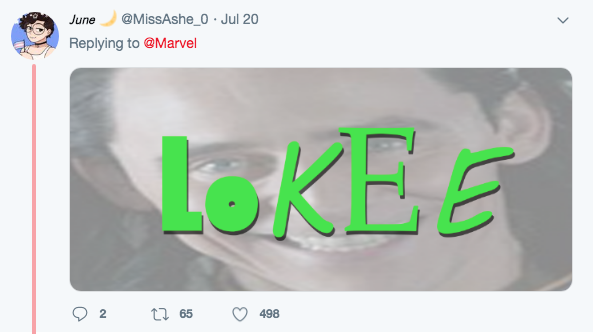 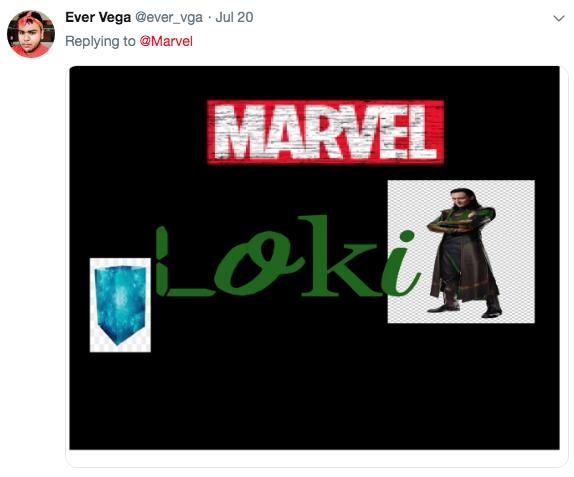 Thanks guys, we love them.

We’ve made it simple:

1. Choose a date and time
2. Put in your billing info
3. Get a calendar invite sent to your email

I’d love to help answer any questions you might have.  Here’s what to do:

1. Choose a date
2. Select a time
3. Get a calendar invite sent to your email

I’m really looking forward to talking with you about your Digital Marketing Strategies.

I’m really looking forward to talking with you about your Social Media Growth & Strategies.

I’m really looking forward to talking with you about your Messaging & Branding.

For the past 10+ years, The Reading Corner School for pre-school age learners had enjoyed major success in the Tampa Bay area.  During this time, founder, Karen Green, developed and field tested her own curriculum to help children from early preschool up to kindergarden master early literacy and math.  With over ten years of currated resources, she wanted to distribute her curriculum so that other parents, teachers, and tutors had both the right tools and the right direction to teach like rockstars.

As the journey began with Paper Jacket, we built a subscription-based website that showcased downloadable resources and optimized the Reading Corner brand as the “Netflix” of early learning curriculum with Karen Green as the master tutor for parents/teachers.

A subscription-based member library of downloadable resources, complete with an e-commerce store for printed material and exclusive video content available only to subscribed members.

We helped Karen build libraries of video tutorials, classroom examples, and promotional material so that parents could engage with the curriculum easily and be excited to invite their friends to join.

From graphic design to custom copywriting to animated GIF’s, the creative team churned out content to be used on social media that sparked interest for the product and drove traffic to the website.

Through the help of their Brand Ambassador and Creative Team, Reading Corner ensured customer relationships by not only catching attention, but continuing the conversation through retargeted ads and email campaigns. 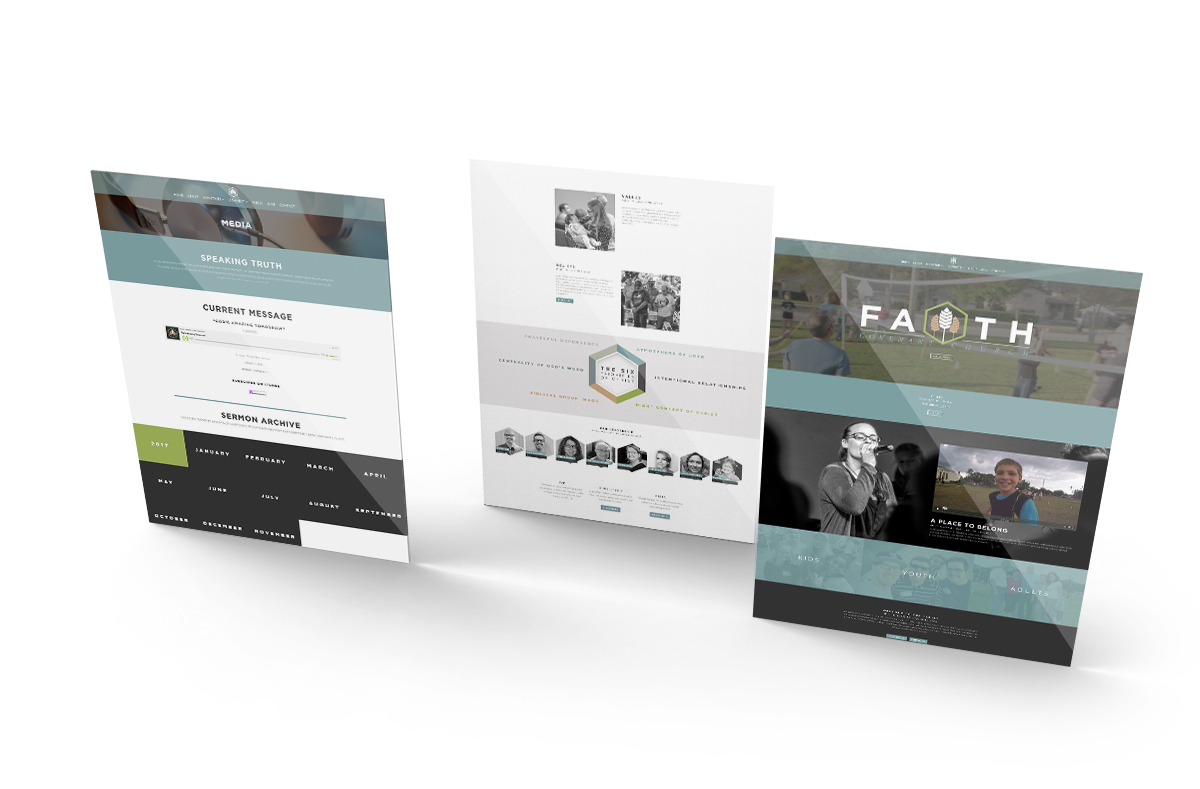 The leadership at Faith Covenant Church in St. Petersburg, FL wanted a better way to engage with their congregation and their community to demonstrate who they were, why they mattered, and how their values brought unity and purpose.

Faith Covenant Church approached Paper Jacket with the desire to rebrand all of their communication elements, from logos to printed material to online media (including website).  Since we began the journey with them, Faith Covenant has experienced explosive growth not only in numbers but in how their congregation is connecting with each other and their neighbors.

We’ve been ecstatic to see what God is doing in their midst and feel honored to share a piece of their story.

We needed to visually explain who Faith Covenant was and their mission/purpose.  Their logo represents a window: a window to see the harvest outside as well as a window to understand the need for growth/discipleship within their midst.  This became the foundation for everything else we created together for Faith Covenant.

Church promotional videos are boring.  There.  We said it.  We knew that we needed to capture the family-driven culture of Faith Covenant that showcased diversity of ages, race, and gender.  We put together a video of the people sharing about Faith Covenant instead of just a talking head of one of the leaders.  Our goal was to cause someone to feel like they could “belong” to a caring congregation such as Faith Covenant.

A good website should do more than be an online brochure.  They need to provide direction, cause engagement, and invoke a “next step.”  For Faith Covenant, we built a custom website that provided the ability for newcomers to discover what makes Faith Covenant so special with the right calls-to-action to visit on a Sunday or engage in other ministries.

Quality communication is vital for any church.  Our assigned Brand Ambassador for Faith Covenant helped walk them through strategic ways to ensure that their congregation knew what was happening and newcomers knew what to expect when visiting.  This included social media graphics, video clips from the messages, event promotions, and even helped design the font-end of their mobile app. 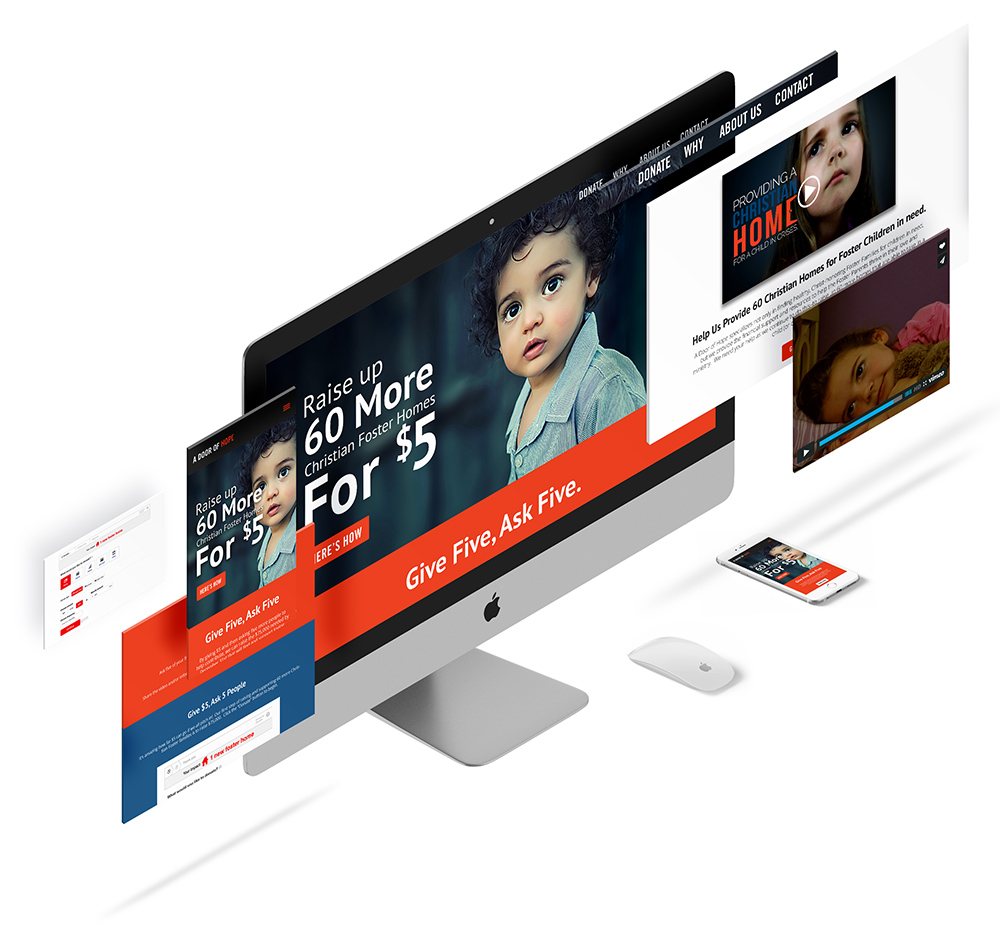 A Door of Hope

A Door of Hope is a faith-based foster agency in Tampa Bay whose purpose is to license Christian families to provide warm, loving homes for children in crisis who have been removed from their homes.  For years, Paper Jacket has worked in helping them develop campaigns, raise awareness, and build a brand so that if someone thought of quality, Christian foster care they immediately thought of A Door of Hope.

We’re proud to say that they have grown to become the largest Christian foster care agency in the Bay area of Florida, including Tampa, Sarasota, and Clearwater.  From successful fundraising campaigns to new foster family orientation classes filled to capacity with interested candidates, Paper Jacket has helped play a part in building a growing community of advocates.

You can see how we began this relationship with A Door of Hope with our case study. 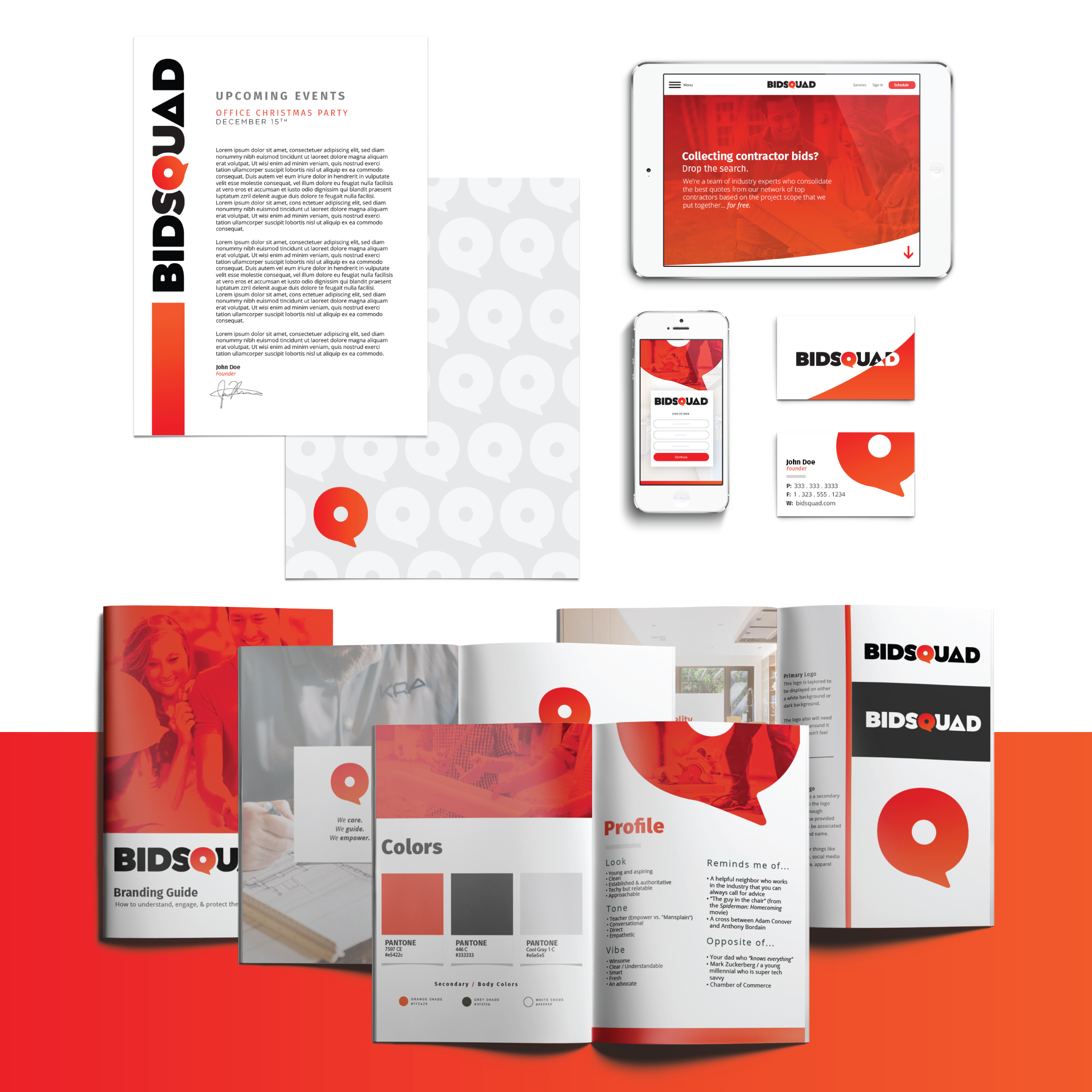 The founders of BidSquad have a simple mission: to bridge the gap between homeowner and contractor by providing a service and app to simplify the bidding process for construction projects.  We’ve been excited to see this company begin from ground zero, and worked with the founders to create the look, feel, and messaging behind everything prior to their public launch.

Our efforts needed to include three aspects: 1) Selling the idea to Homeowners, 2) Creating interest for contractors to join in on the concept, an 3) helping recruit quality sales reps.

We love helping Startups because we love the passion that is brought to the table as they begin their journey forward. 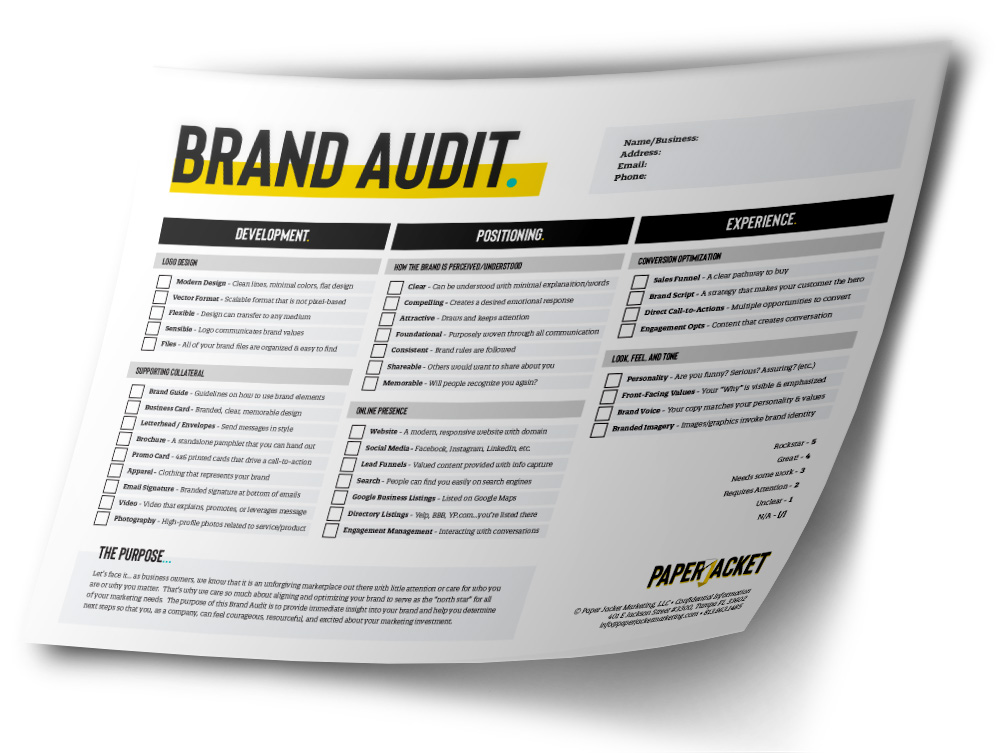 What’s This Brand Audit for?

Use our Brand Audit to determine the status, health, and readiness of your brand.  This is one of the tools that we use in each of our client Branding Sessions so that we can put the right strategy in place.

Fill out the info below to receive your free Brand Audit PDF download.